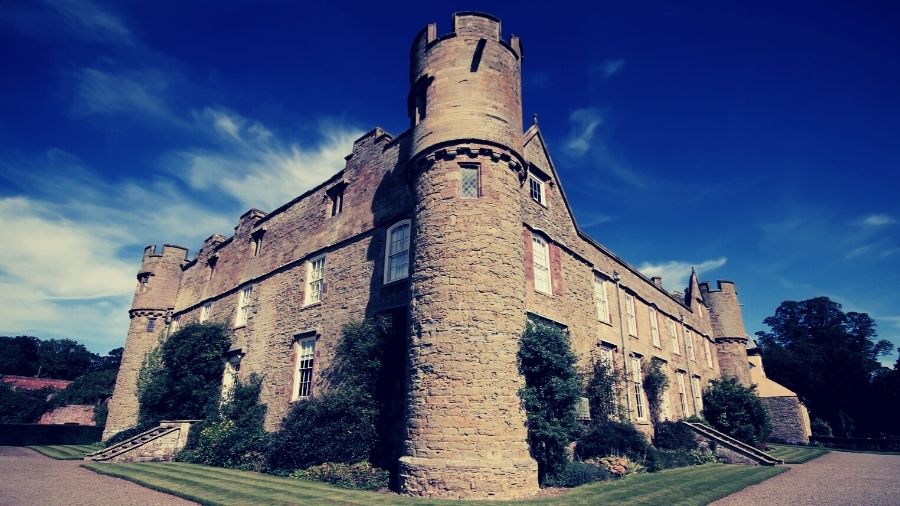 The Croft Estate in Herefordshire has nearly always been the home of the Croft family. The site was founded by Norman knight Bernard de Croft, during the reign of Edward the Confessor. The first record of any kind of building dates back to Domesday in 1085.

Under the care of the National Trust since 1957, the current Croft estate comprises a country house, park, church and garden. The original castle building dates back to the 14th century when it was the home of Sir John de Croft. He was a Croft descendant who married Jonet, the daughter of Welsh nationalist freedom fighter Owain Glyndŵr, in the 1390s. These days, Glyndŵr is popularly believed to be one of Croft Castle’s more infamous ghosts.

After the castle suffered substantial damage during the Civil War, the Croft family spent considerable amounts of money on its renovation. The basic shell of the current Grade 1 listed castle was thought to have been built in the early 17th century.

Sadly in 1746, after 700 years in residency at Croft Castle, the Croft family were forced to leave their ancestral home. Bankrupted through poor investments, Sir Archer Croft had no option but to sell the castle and estate, which was bought by self-made millionaire Richard Knight.

Then 170 years later, the castle was reclaimed by another Croft descendant, Lady Katherine Croft. She and her children lived in the house, bringing it back to life with parties and social events throughout the 1920s and 1930s.

During WW2 and until 1946, the castle building housed St Mary’s Convent School for Girls. To this day, graffiti marks made by former pupils can still be seen in the attic.

The Croft estate was inherited by Michael, Lord Croft in 1947, who entrusted its permanent ongoing preservation to the National Trust. Reputed to be the most haunted house in the Midlands, there are thought to be seven spectres in residence at the property.

The most imposing of these ghostly figures is a seven-foot man seen wearing a leather jerkin, who is thought to be the ghost of the Croft family’s 14th-century antecedent, Owain Glyndŵr.

Over the years, a number of haunted house stories have been reported at Croft Castle. Some staff claim they have heard the wailing cry of a baby; other alleged incidents include the sighting of a spectral figure, wearing a grey doublet and hose.

Then there are reports of a ghostly figure of a woman, dressed in crinoline and a close-fitting cap, seen peering out through a window. This apparition is believed to be the ghost of a member of the Croft family, desperately waiting for money to be sent from a relative in Ireland.

The spooky female form has been spotted in various different locations around the house. According to one story, a woman entered a room to meet a friend one day; the friend immediately stood up and asked to be introduced to her companion – but no-one was there.

The Croft family were known for their unwavering loyalty to the monarchy. Sir Richard Croft fought alongside Edward, 4th Duke of York during the Wars of the Roses, then became Treasurer to King Henry VII’s household, and later Steward to his son Prince Arthur. In 1671, Bishop Herbert Croft’s son was created a Baronet – a title that still lives on to this day.

The church of St Michael and All Angels immediately adjacent to Croft Castle dates back to the 14th century. It has been used extensively by the Croft family over generations for worship and burials and is still regularly used by the local community.

Four large, inscribed gravestones were recently discovered behind the church altar, underneath an old carpet. Three of these honour Croft family members, including Sir William Croft, a Royalist soldier and casualty of the Civil War.

Sir William is believed to have fought in the siege of nearby Stokesay Castle. In 1645, the castle was surrendered to Parliamentarians by the Royalist garrison without a single shot being fired.

According to Croft legend, while a small band of Royalists were plotting Stokesay’s recapture, Sir William fled on horseback, home towards Croft Castle. He made it as far as the castle walls, then was shot from behind and fell, fatally wounded, beneath an old oak tree.

This tree, the ‘William Oak’, still stands in the West Park, where it’s rumoured Sir William’s ghost can sometimes be seen. By contradiction, the inscription on his gravestone tells of “valour in his death”, and how he was “shamefully abandoned” by his fellow soldiers.

Croft Castle is steeped in history, which inevitably includes both truth and legend. But the old building clearly has an air of mystery about it, and the stories of ghostly apparitions and spooky happenings are without a doubt compelling.

MJ Wayland is a No.1 bestselling writer, researcher and historian specialising in ghosts, supernatural and Fortean subjects. His research has appeared in dozens of publications and he has consulted and appeared in over one hundred television programmes and documentaries. Over the last fifteen years, he has lectured internationally, appearing at the Oxford Literary Festival and Latitude Festival. His research has taken him from the dark haunted castles of Britain to the haunted graveyards of New Orleans, Loch Ness to Vlad The Impaler’s Castle, Romania.